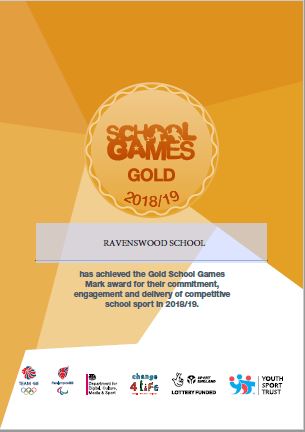 We are delighted to announce that Ravenswood School has again achieved the School Games GOLD LEVEL Mark Award, this time for the 2018/19 academic year.

The School Games Mark is a Government led award scheme launched in 2012, facilitated by the Youth Sport Trust to reward schools for their commitment to the development of competition across their school and into the community, and we are delighted to have been recognised for our success.

Our sporting achievements this year included:

We are extremely proud of our pupils for their dedication to all aspects of school sport.

As part of our application, we were asked to fulfil criteria in the areas of participation, competition, workforce and clubs, and we are pleased that the hard work of everyone at our school has been rewarded this year.  We especially thank Jane Hawkes for all her hard work in helping us achieve the award.

A FIRST FOR RAVENSWOOD: DUKE OF EDINBURGH BRONZE AND SILVER AWARDS! Huge congratulations to Dan and Louis for completing their Bronze Duke of Edinburgh Award.  This was the first time that we have run the Silver Award at Ravenswood and we are so proud of our four, exceptional young people, Morgan, Becky, Sophia and Michael, who have completed it.  The pupils have shown determination, commitment, leadership and teamwork throughout the course.  A huge well done to everyone involved.

Congratulations to everyone at Ravenswood School for once again achieving the School Games Mark GOLD award.  This is the 3rd year we have achieved this prestigious award.  We are extremely proud of our young people for entering competitions, showing healthy lifestyles and acting as Sports Leaders.  Special thanks to Jane Hawkes for supporting us all to achieve GOLD.

Post 16 actors from Ravenswood School wowed the audience with their fantastic performance of Julius Caesar at the Tobacco Factory in Bristol.  Their production was part of the Shakespeare Schools Festival and was full of music and colour.  The students worked incredibly hard in order to remember their cues and lines.  They listened well, worked as a team and supported one another throughout the rehearsals.

Staff, parents and carers are incredibly proud of our young people who all took part and overcame any nerves they had.  It was an evening we’ll remember for a long time!

In response to the performance we had these lovely messages:

As a parent of a child at Bristol Grammar School, I was at the performance at the Tobacco Factory last night.
I just wanted to congratulate your actors on an amazing performance, I think you all did the play justice and the confidence that came through was inspirational.
Well done and thank you to all involved. I just wanted to send a message to say how much I enjoyed the performance of Julius Caesar last night, as did my children and fellow staff.  I am sorry I didn't get chance to say in person!  I hope you and your students enjoyed the evening, there were so many brilliant characters and the cast worked together so well.  We were also in awe of your staff.  We were thrilled that we had the opportunity to see the performance on the night.

We are delighted to announce that Ravenswood has achieved the School Games Gold Award for a second year running!  The School Games is a celebration of competitive sport that involves all our young people - years 3 to 13.  Find out more about School Games awards. 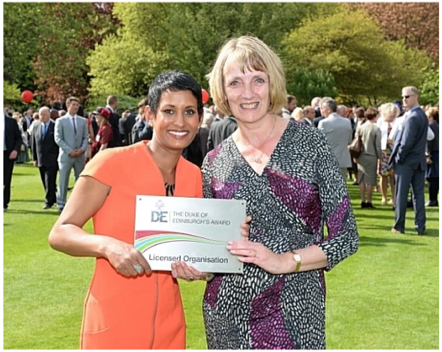 Mrs Clark and Miss Barnes had the pleasure of representing Ravenswood at the Duke of Edinburgh Diamond Jubilee at Buckingham Palace. There were celebrities supporting the event as well as the Duke of Edinburgh himself in attendance. Of course, the real stars were our pupils who put in all the hard work learning how to cook outdoors, putting up tents, learning to read maps, walking the trails and sleeping in a tent overnight!

Ravenswood School pupils performed at the Tobacco Factory in the Shakespeare Schools Festival.  Their production of Romeo and Juliet attracted some wonderfull feedback from the festival's Venue Director, Moira Hunt:

"Congratulations to the cast and crew of Ravenswood School on their wonderful production of Romeo and Juliet at the Tobacco Factory.  This was an accomplished and original production, a few key elements which really stood out:

The narrators introduced the characters one by one at the beginning of the piece.  Each performer stepped forward and struck a strong physical pose which represented their character - such a lovely idea and a great aid for the audience!

The cast did a great job of portraying the high emotional stakes for these characters - you really tugged at our heartstrings.  The moment when the nurse discovered that Juliet was dead was particularly powerful. Her heartfelt reaction emanated such sorrow.

The production made great use of the ensemble.  The swordfight at the beginning of the play was particularly strong, drawing us into this world of violence and rivalry.

The production completely embraced the tragedy of the story.  The end, when the audience were confronted with the image of Romeo and Juliet lying dead centre stage, was a truly heart-rending.  This production was colourful, emotional and beautifully sorrowful.  A huge congratulations to all the cast and crew who made it happen.  I hope to see Ravenswood School in the Festival again next year."

Shakespeare Schools Festival is the UK's largest youth drama festival, and it works with over 1,000 schools and 150 professional theatres.  They provide "all the tools, support and guidance necessary to enable schools to take students aged 8-18 on a wonderful journey by performing their own Shakespeare productions in front of a paying audience."

We are delighted to announce that Ravenswood has achieved the School Games Gold Award. We are delighted to announce that Ravenswood has achieved the School Games Silver Award. RAVENSWOOD TRIUMPHS AT THE NOSCARS The gala evening was held on the Grand Pier at Weston-super-Mare and awards were presented to young animators from schools across North Somerset who had created films for this year's competition.  Ravenswood pupils were all dressed-up for the ocassion and represented the school extremely well.

Through the work of Jane Hawkes, SSCO, we are proud to have achieved the School Games Bronze Award for PE and Sports.  Next we aim to achieve the Silver Award!

Yellow Class and Green Class created an animated film together called ‘Animals’ and entered it into the Create! Art for Autism 2013 competition, the national competition to celebrate the creativity of young people with an Autism Spectrum Condition. 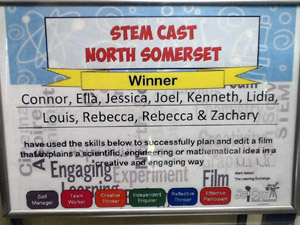 The Earth Class film was recently shown at the STEM Cast awards ceremony in the Curzon Cinema in Clevedon.

Ravenswood was recently presented with the e-Safety mark in recognition of the high standards of our e-safety provision.  The Assessors spent the morning interviewing school staff, parents, governors and students and reviewing evidence that the school had produced.  They were pleased to find that the school provides a high level of protection for their pupils and staff. 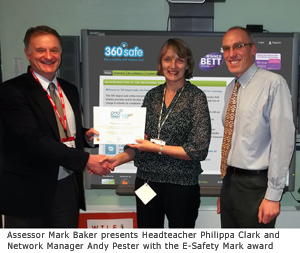 Ravenswood joins only three other schools in North Somerset to hold the award.   To apply for the 360 degree safe e-Safety Mark schools have to reach a series of benchmark levels when they complete the 360 Degrees Safe online self-review.  During the assessment visit the school had to demonstrate that it does not only focus on the individual aspects of e-safety such as technological solutions, but also integrates e-safety into school policy and the curriculum.

Ron Richards, Lead Assessor for the 360 Degrees Safe E-Safety Mark congratulated the school on its success and commented that the school had put a lot of thought and effort into improving the online safety of the staff and young people, by addressing these important safeguarding issues.

Ravenswood welcomes enquiries from any school considering how to improve its e-safety and would be happy to discuss how it has met the standards required for e-Safety Mark accreditation.

We were pleased to be awarded 'Healthy Schools Plus' in 2012.

Healthy Schools Plus aims to:

• bring about healthier behaviours among children and young people

Ravenswood was proud to receive the ‘Investors in Families' award in recognition of the work we do with our families.  It is a national award that celebrates with parents how much ‘impact’ we are making on children’s learning by working together in partnership.

In order to achieve the award Ravenswood we had to demonstrate that we:

• support families in developing their children's achievement and self-esteem

• help families participate in raising their children's achievement and self-esteem