NINE MEMBERS OF STAFF WALKED A TOTAL OF 234 MILES FOR CHARITY!

The event, for MacMillan Cancer Support started at Chepstow Racecourse and finished 26 miles later at the Monmouthshire Showground near Monmouth.  It was preceeded by a number of 'training' walks of increasing length over several weeks. 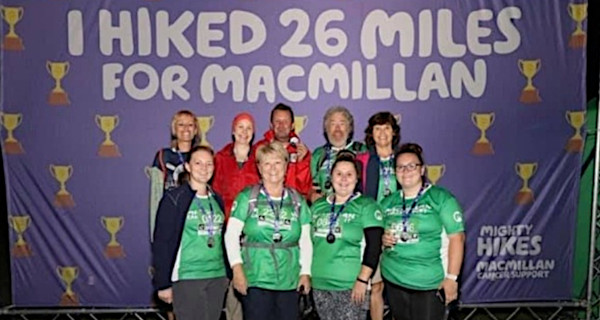 One of the walkers said "We all regrouped as a team at every refreshment stop and once everyone felt able to move on we continued to the next refreshment stop or ‘Pit Stop’ as they were referred to.  Training had gone well for us and we were able to make the twenty miles in good spirits. The final six miles became a little more daunting and leaving the final Pit Stop we were all becoming a little weary.  As darkness fell we finally realised why a head torch had been on the kit list as the path wound its way along the steep bank of the river Wye into the final field to the finish line. We were cheered in and received well earnt medals and a glass of Prosecco.  I must admit I didn’t want to sit down in case it was too difficult to stand back up.  There were laughs, tears from some, sore feet for most of us and a few achy backs but it was great to all complete the course knowing we were raising funds for a good cause."

As a team “The Ravenswood Ramblers” raised just over £3,000 and with gift aid to add to this total we will be approaching £3,500 – a fantastic achievement by everyone.

"On behalf of MacMillan, The Ravenswood Ramblers would like to thank everybody who sponsored us individually and as a team.  Now recovered, we are looking to our next challenge to raise funds towards our new school Sports Hall."